Harmonics on the guitar are fun little chimes, squeals and dings that can spice up your sound. They are fractional sounds of an original fundamental note achieved by touching a guitar string at specific points along its length.

Open string harmonics have a nice bell like sound. To play an open string harmonic, lightly rest the tip of your finger on a string just above a fret wire without actually pressing down, then pick, tap or pluck the string. It may take a couple of tries at first but when you succeed the sound of the harmonic is unmistakable.

The easiest frets to trigger an open string harmonic on are the 5th, 7th, and 12th fret of every string. Every fret has them if you hit it just right but 5, 7 and 12 are the easiest.

Pinched harmonics are triggered when some of the meat of your picking hand, fingers or even your pick lightly touches the guitar string during or immediately after being picked. I feel it's easier to pinch harmonics using my index finger but others prefer using their thumb. You'll have to see what feels most comfortable to you and explore a little to find the best spot where a pinched harmonic is most likely to occur. Pinched harmonics are addictive. Once you find that sweet spot you will want to use all the time which can be annoying to you listeners. Use them sparingly.

You might find it easier to trigger a pinched harmonic in combination with a string bend. The reason being is that for some it's easier to pull the string to your picking finger during a bend rather than trying find and touch the harmonic sweet spot after the string was picked.

Learn how to use harmonics to tune your guitar

See also How to to tune your guitar.

You can tune your guitar using harmonics. To do this you will want to have either the 5th or 6th string already in tune. However, this method will work even if you don't have one of those strings tuned but the guitar as a whole will not be tuned to concert pitch but rather tuned to itself.

When playing certain harmonics at specific frets, you can use them to match the harmonics or notes at other frets. Here is an easy list of harmonic / notes combinations you can use to tune each string:

Tuning your guitar with harmonics 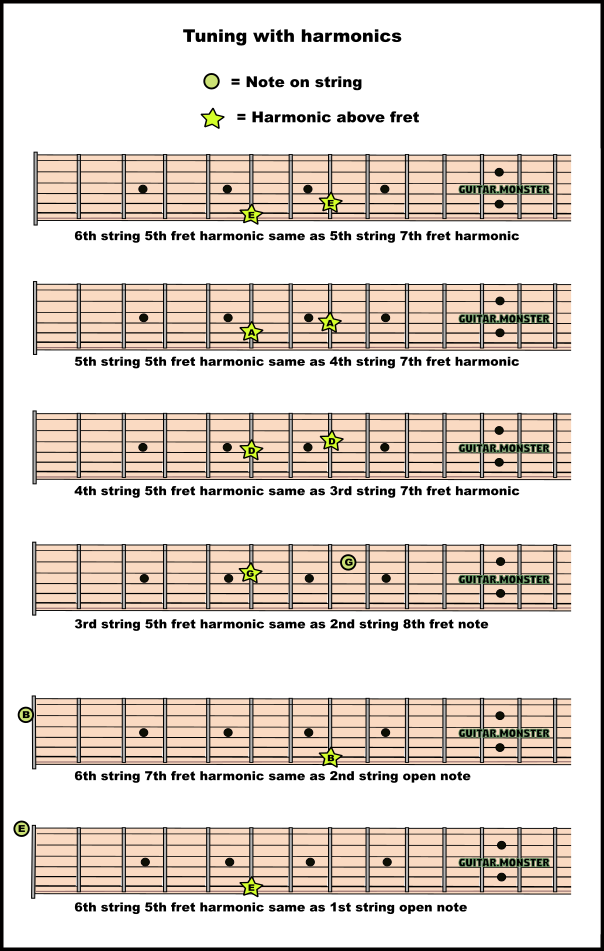 Follow these steps to tune your guitar using harmonics

In the above graphic the letter names on the stars are the note names of the pitch of the harmonic above that fret. Starting from the 6th string, tune the next string up following the steps below.

For example: consider the first one on the list - make the 5th string harmonic at the 7th fret sound the same as the harmonic on the 6th string 5th fret.

Other tricks with harmonics

Here are some other harmonic tricks to try that are just variations of the techniques mentioned above.

Pull off harmonics are used frequently in Rock and Metal. Achieving one is a two step process where you first pull off to an open string with a finger of your fretting hand then quickly touch the harmonic at around the 3rd of 4th fret with the same finger you just pulled off with. The result is a high pitched squealing harmonic. This works best on the 3rd string and when used in conjunction with a whammy bar dive bomb and a loud amplifier to get maximum effect and a nice sustained harmonic.

Holding a chord shape with the fretting hand then tapping the strings with the fingers of the picking hand near the sound hole or your electric guitar's pickups make for some interesting sounding harp like harmonics.

String squeaks usually happen on accident between chord changes but there may be times when you want to make a string squeak on purpose. To squeak, let your fretting hand lightly rest on the strings and then gently move it up or down the neck without pushing the strings down. This sounds best when used on an acoustic guitar.

Whichever type of harmonic you are trying to produce find that sweet spot and practice until you can hit it every time on demand and soon you will be a guitar harmonic monster!